Here Is My Kingdom: Hispanic-American Literature and Art for Young People

Selected by the New York Public Library as one of the year's best books for teens.

The book’s title responds to a poem by Pedro Lastra: “They will drive me out, those last sentinels still awake on the turrets; and they too inquire who I am and where is my kingdom.”

“To present a survey of the Hispanic American experience and of the art produced by it, Sullivan (editor of the noteworthy anthology of African American art and literature Children of Promise) gathers works by more than 100 painters, poets, writers, photographers, activists, scholars and historical figures. This time he builds an even more resonant portrait of a minority struggling to define and maintain its identity. Greats like Picasso, Tamayo, Paz and Rivera share space with folk artists, anonymous ancients and young contemporary artists. Anglos like James McNeill Whistler and Robert Frost add perspective, but the direct experience of Latinos never lapses--a consistent political urgency rises among the frequent flashes of gentle humor and the handsomely reproduced, often sensuous images. The poetry is particularly striking in its steely lyricism. Sullivan brings to this serious task great imagination, flair and sensitivity, and he delivers an inspiring book." -Publishers Weekly

From the foreword by Luis R. Cancel, former Commissioner of Cultural Affairs in New York City, and former Director of Cultural Affairs and head of the San Francisco Arts Commission: “Most of the authors and artists included in Here Is My Kingdom reflect the diverse cultural origins that constitute Latinos in the United States. It is a point to keep in mind as you read this literature: though the authors often share a Spanish surname, they may each represent a different cultural heritage and community history. Some, like César Chávez, are the children of migrant farmworkers. When he proclaimed the beginning of the Farm Workers Union struggle for economic justice, this was similar to the efforts by the Young Lords, in New York City, to secure political and economic power rights for Puerto Ricans. Other authors, like Odilia Galván Rodríguez, evoke the power of the arts to transform a sterile urban environment into a radiant symbol of peace. Some of these authors were political refugees searching for freedom; their literary works capture the hopes and aspirations shared by many new immigrants. Some writers, like Dave MartinNez, identify more closely with their indigenous cultural roots, while others draw upon their European or Afro-Caribbean backgrounds." 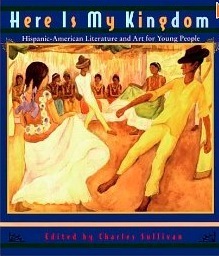