“As a parent, introducing children to great art and literature is one of the joys of life. Even the satiny texture of the pages of Imaginary Gardens adds to the sensory pleasure of this audiovisual delight.” –Albuquerque Journal

“A great deal of thought has gone into the production of Imaginary Gardens, an elegant anthology that takes its name from Marianne Moore's "Poetry," in which she insists: "poets among us must be literalists of imagination . . . and can present for inspection, imaginary gardens with real toads in them." Here is a dazzling volume, rich in poetry, art and photography. Included are childhood favorites and classics by Carl Sandburg, Robert Frost, Walt Whitman as well as verse by contemporary poets. Art by such notables as Alexander Calder, John Singer Sargent, David Hockney (to name a few) is often juxtaposed with poetry selections, harmoniously enhancing subject matter and themes. T.S. Eliot's "The Song of the Jellicles" is humorously matched with Roy Lichtenstein's "Laughing Cat." Particularly poignant is a NASA photograph entitled "Astronaut Sharon Christa McAuliffe" paired with Emily Dickinson's "Because I Could Not Stop For Death." Readers of any age will find this volume a treasured companion.” –Boston Globe

“The juxtaposition of art and poetry is not an original concept, but this volume contains an especially felicitous selection. The collection of photographs, superb artwork and splendidly varied poems--both silly and serious--is eclectic and historically comprehensive. Winslow Homer’s 19th-century ‘The Fox Hunt’ with its rook shadow accompanies Valerie Worth’s ‘Crows’ and Barbara Angell’s ‘Fox’s Song.’ Carl Sandburg’s ‘Milk-White Moon, Put the Cows to Sleep’ is pared with Roy Lichtenstein’s ‘Cow Triptych.’ Whitman’s moving ‘The Words of the True Poems’ and two of Dickinson’s poems about death are aligned with a photograph of the late teacher/astronaut Christa McAuliffe. Poet Sullivan (America in Poetry) has a discerning eye, and has chosen poems and art that not only reflect the breadth and depth of the American experience, but are accessible to children of varying ages. From the startling Chippewa Indian song about greatness to the brilliant photograph of the earth seen from Apollo 17 spacecraft, each page is a dazzling surprise.” –Publishers Weekly

“From Sargent's painting 'Carnation, Lily, Lily, Rose' on the front jacket to Calder's 'The Horse' on the back, this book is a storehouse of delight in both sight and sound. An arbor gate embossed on the cover is typical of the attention paid to bookmaking as well as invitation into these Imaginary Gardens. Page layouts provide ample space for eyes and minds to roam and rest while the block of color that illuminates the first letter of each poem draws one to the words. The title page expands to a double-page spread with the bold red, pink, green, and purple-blue from David Hockney's stylized painting of 'The Garden' spilling out into blocks of color containing title and publisher and Robert Penn Warren's poem 'What Voice at Moth-Hour.' Hockney's garden is very different from Sargent's, which is repeated above Sandburg's 'There Are Different Gardens,' the first poem in the text proper and an apt introduction to this volume. What follows is a wide range of subjects, styles, and time periods in both poetry and art, with the work of Whistler, Homer, and Gilbert Stuart seen alongside modern art, folk art, cartoons, and photographs. There is something very right about moving from Emily Dickinson's 'I Never Saw a Moor' and 'Because I Could Not Stop for Death' to a photograph of Christa McAulliffe and Walt Whitman's 'The Words of the True Poems.' This is truly a book to be seen and heard and shared over and over again.” –School Library Journal

“Thoughtful readers of any age will find pleasure in this beautifully composed book.” –The Horn Book 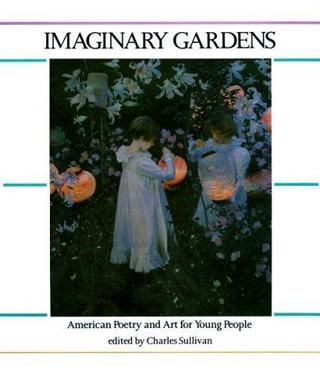